On the Importance of Following Breadcrumbs 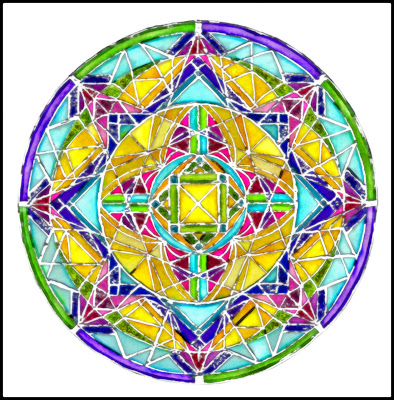 In my process of what I've come to call, sacred altering - combining traditional mediums with digital technology, I never cease to be amazed by the final outcome.  In the case of this mandala, what started out as watercolor on canvas was transformed into something that reminded me of batik.   I didn't know that much about the actual batik process, so I began to do some google/research.  Well...that led to one of my favorite breadcrumb trails...aka Wikipedia.  This paragraph on the cultural role of batik especially captured my attention:

Batik garments play a central role in certain rituals, such as the ceremonial casting of royal batik into a volcano.  In the Javanese naloni mitoni "first pregnancy" ceremony, the mother-to-be is wrapped in seven layers of batik, wishing her good things.  Batik is also prominent in the tedak siten ceremony when a child touches the earth for the first time.  Batik is also part of the labuhan ceremony when people gather at a beach to throw their problems away into the sea.

Several years ago, on another breadcrumb trail totally unrelated to batik, I had learned about the ceremony of a child touching the earth for the first time, and also another custom known as "lotus birth" which is the practice of leaving the umbilical cord uncut after childbirth so that the baby remains attached to the placenta until the cord separates naturally - a process that can take anywhere from 3 to 10 days.  Fascinating stuff!  Of course there is much debate about whether that is a good idea, but that is not my point.

My point is...for me, each piece of art I create, whether it ever makes an appearance in public or not, becomes my teacher...a starting point on  a unique kind of journey I would otherwise never have taken.  My own "road less traveled."    I follow breadcrumb trails into forests I never would have known about otherwise - the kind you don't  find on a map.  I become acquainted with countries and customs and more than a few characters I might have missed out on.

The things I learn may seem esoteric...obscure...even useless to some...but to me they are things worth knowing, because in them, I hear echoes - faint, yet distinct hints of something I can't always quite put my finger on, but  I know, nevertheless,   is important.  It's another piece of the puzzle in place, another dot connected...which brings me back to "batik" - which comes from the Javanese words:  amba ("to write") and titik ("dot" or "point").  It's ok...it makes sense in my world.
Posted by Stacy Wills at 2:21 PM

"each piece of art I create, whether it ever makes an appearance in public or not, becomes my teacher...a starting point on a unique kind of journey I would otherwise never have taken. My own "road less traveled." I follow breadcrumb trails into forests I never would have known about otherwise - the kind you don't find on a map." I hear you dear Stacy! Keep following those bread crumbs:-)

I sure will, Laura! I'm pretty sure I've seen you out on that trail yourself. ;-)

Beautiful as always. :) And I love the story behind it too!