through a child's eyes 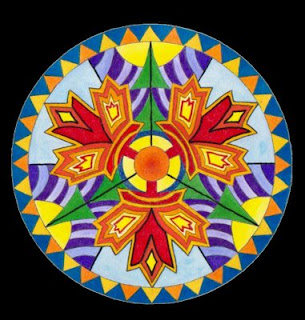 when i was a little girl
i assembled a congregation
of stuffed animals and dolls
then to my makeshift altar
i brought a humble offering
of the prettiest leaves i could find
and sang the only hymn i knew
in praise of god's creation
no sweeter communion
no better psalter
have i experienced since then
Posted by Stacy Wills at 5:32 AM 9 comments: 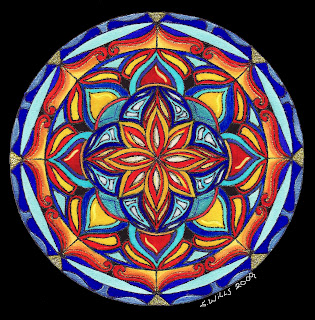 as i sat by the fire
charting the night sky and
watching the sparks fly
heavenward
i could not help
but envy their freedom a little
wishing that i, too,
could fly away home
Posted by Stacy Wills at 5:01 AM 1 comment: 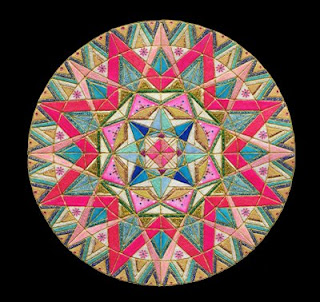 there lives in me
the sacramental instinct
to find the holy in all things
and to cherish what is
threatened with extinction
Posted by Stacy Wills at 6:43 AM 2 comments: 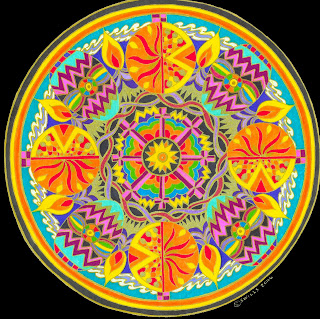 typically, i do not like to explicitly interpret my mandalas, but several people had asked me to write an explanation about this one, so i obliged.

Starting at the center..."in the beginning"....

The jagged purple and yellow rings are symbolic of "the fall." "Cursed is the ground because of you...it will produce thorns and thistles..." Genesis 3:17-18

They also are representative of the crown of thorns placed on Jesus prior to the crucifixion. "Then the governor's soldiers took Jesus...they stripped him and put a scarlet robe on him, and then twisted together a crown of thorns and set it on his head..." Matthew 27: 27-29

The intertwining cords of scarlet and lavender are reminiscent of the robes the soldiers dressed him in. "They clothed him in a purple robe and went up to him again and again, saying, "Hail King of the Jews!"....When Jesus came out wearing the crown of thorns and the purple robe, Pilate said to them, "Here is the man!"

On top of and overshadowing all of this the cross. In each quadrant there is a larger cross flanked by two smaller ones. "Two other men, both criminals, were also led out with him to be executed. When they came to the place called the Skull, there they crucified him, along with the criminals - one on his right, the other on his left..." Luke 23: 32-33 "I have been crucified with Christ, nevertheless I live, yet not I but Christ lives in me..." Galatians 2: 20

The black backdrop speaks of the darkness that fell over creation at the time of the crucifixion. "It was now about the sixth hour, and darkness came over the whole land until the ninth hour, for the sun stopped shining..." Luke 23: 44-45

The egg shape represents both the tomb and new life. As you can see it is breaking open, and the colors of creation are coming forth - death doesn't have the final word. "Death has been swallowed up in victory." I Corinthians 15:54

To the right of the egg is a circle which symbolizes the stone that was rolled away from in front of Jesus' tomb. The women coming to the tomb that morning to anoint Jesus' body did not know how they were going to remove it. "When the Sabbath was over, Mary Magdalene, Mary the mother of James and Salome brought spices...they were on their way to the tomb and they asked each other, "Who will roll away the stone..." But when they looked up, they saw that the stone, which was very large, had been rolled away." Mark 16:1-3

The design on the circle is evocative of a few things: the day of Pentecost, the outpouring of the Spirit, the beginnings of the early church, as well as the irrepressible nature of Life...with a capital "L." "In the last days, God says, I will pour out my Spirit on all people." Acts 2: 17

In between the egg and the circle is a flame which represents the Holy Spirit, who hovers "over the waters" (depicted in the mandala by the color aqua) of creation and of baptism. (Genesis 1: 2, Matthew 3:16)

If you will notice, the pink and purple (colors used during both Advent and Lent) of the cross are repeated on the egg, as well as on the foundation pedestal undergirding the circle. This speaks of how far reaching the birth, life, death, resurrection and ascension of Jesus is. His life affects not only all of humanity, but all of creation as well.

The inspiration to create this mandala came to me as I was reflecting on my own spiritual journey, so it has a great deal of personal significance for me. My name, Stacy, comes from the Greek word Anastasia, which means "of the resurrection."
Posted by Stacy Wills at 8:14 PM 1 comment: 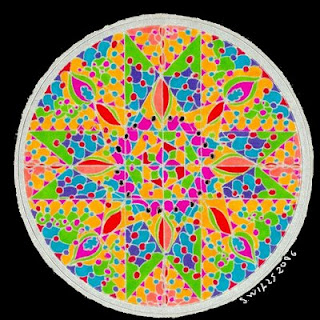 if i could, i would show you
a cross-section of my soul
then you would see
that like the pomegranate
i, too, am filled with seeds
rainbow seeds
Posted by Stacy Wills at 7:27 AM 3 comments: