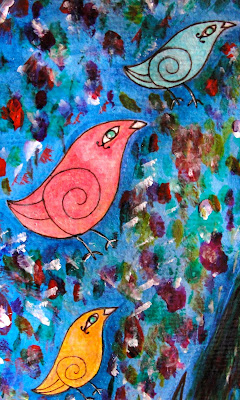 as i mentioned in a recent post, i have signed up for life book 2012. when i signed up, i was able to take one of tam's other online courses. this is the third painting i have completed for the M3 class, the style of which was inspired by one of my favorite artists, marc chagall. i love the little birds that showed up, wanting to be part of the picture. 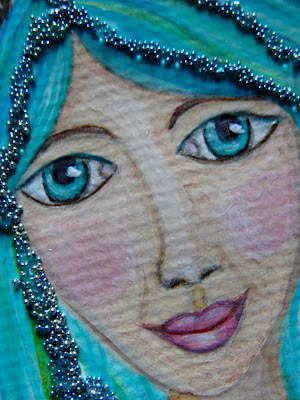 a close-up of the face shows the hundreds of tiny beads that make up some of the strands of my mermaid's flowing tresses. did i ever mention that the little mermaid was a favorite fairy tale of mine growing up? 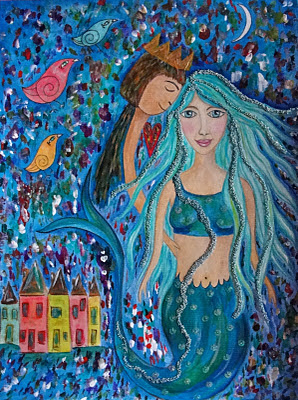 and here she is in all her glory! when i began drawing mandalas back in december of 2005 i had no idea really what i was doing, but what i did know was that i had found the creative outlet i'd yearned for. i never imagined then that i would be able to draw or paint anything else - though i wished i could. when i came across tam's website and saw what life book was about, something in my soul said, "yes." so i'm diving in - i still don't know what i'm doing, or where this journey will take me, but i'm in...all in. there's a steep learning curve to be sure (and i have MUCH to learn), but it's a curve i'm embracing.
Posted by Stacy Wills at 7:37 PM

I love your mermaid, Stacy, and I love that you are embracing other levels of untapped talent.

thank you, kate...i love her, too, for many reasons. i really appreciate your encouragement!

LOVE this Stacy...you know what your doing, it is just on a deep, deep level of knowing, below consciousness...a good place to hang out as an artist.

thank you, laura - i take great comfort in your words!