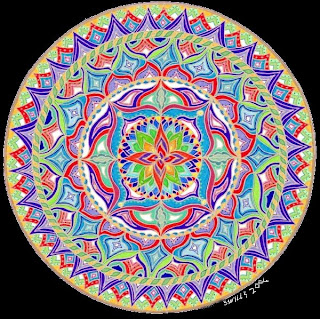 this mandala was drawn while listening to ten days in a mad-house, a true story written by investigative reporter nellie bly (1864-1922) about her undercover experience in the deplorable conditions of the women's lunatic asylum on blackwell's island. her expose' led to major reform.

i showed the mandala to a friend of mine, an episcopal priest and mary devotee, who saw in it the colors associated with the virgin and also of advent. i knew immediately advent was to be its name.

most of the time, my mandalas tell me their names...but sometimes i learn their names from the lips of others. in that instant, i also realized that nellie and mary had something in common - a willingness to put themselves at risk, in order to bring help to others.
Posted by Stacy Wills at 6:38 AM