the rest of the story... 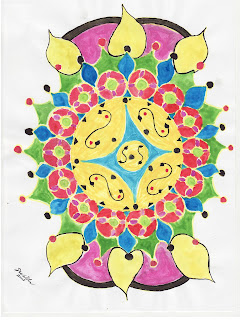 i've always had very vivid dreams. i can remember dreams i've had since i was about 4 years old.


back in 2004, i saw an article in the paper about a local dream group and an upcoming conference on dream work to be held at st. james episcopal church. it piqued my interest big time, so i signed up.

the conference was put on by a group called journey into wholeness. turns out, it was not so much about dreams per se, as it was a crash course on carl jung - kind of a jung 101.

i felt as though i'd been thrown into the deep end of the swimming pool. i absorbed as much of the information as i could, and learned, among many other things, that carl jung started each day drawing a simple mandala - his way of "just dropping in to see what condition his condition was in."

fast forward a year - a group of friends and i decided to read the book, the artist's way by julia cameron, together. i was still groping for my creative outlet when i remembered jung's practice of drawing a mandala, and thought to myself, "well, at least i could draw a circle."
genesis was the result, and it was as if the floodgates opened and all the color i had bottle up inside came pouring out. or as my husband describes it: "it was like somebody shook up a bottle of champagne and then popped the cork."

oh yea, popped a cork indeed...talk about finding your gifts, you certainly did! 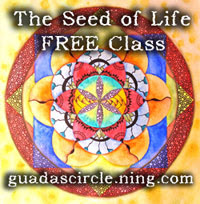